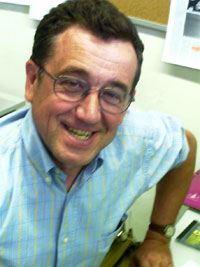 Some time ago (actually not too much), at the beginnings of the Internet and search engines era, if one searched for the term "usability" in Spanish (so fashionable nowadays), the result returned only the name of a professor from the University of Lleida called Jesús Lorés and its emerging related work.

Jesús was an enthusiast. An enthusiast of computing (he manufactured a micro-computer before the first PC arrived to our hands), an enthusiast of ecology, an enthusiast of sustainable development, but mainly, a fan of the Human Computer Interaction (HCI) discipline. From him (who worked with him) we learned that the most important component and, surprisingly, the most forgotten of many concepts related with computers is not technology itself but the people who use it, need to use or just wish to use.

His concern was not to develop the most ever developped and efficient algorithm or to have the newest versions of all software and hardware available. His main interest was to enable all people (regardless of their skills, knowledge or disability) using any device or interactive system. So he created and promoted at local level the GRIHO group, research group at the University of Lleida dedicated to researching issues related to the interaction between people and computers. He was also founder, along with a small group of enthusiasts, like him, from some Spanish universities, the Human-Computer Interaction Association (AIPO from Asociación Interacción Persona-Ordenador in spanish) who conducted and presided until his death in November 06.

Jesus was aware that what he was doing was important and did well, though it won't yeld himself with high index level in the JCR! (which so concerned we have all of us).

He continued faithful to his ideas, illusions and utopias to have a more humane world.

Being, as explained, a group of university research in a particular area, by naturall arose the first approach to identify it. This was the Research Group on People-Computer Interaction, but its acronym GRIPO (in Catalan) didn't sound good and was rejected. So moved by the Research Group on Human-Computer Interaction with the current acronym, GRIHO.

Later, around 2001-02, with the inclusion of members comming from databases field, the group name changed to current Human-Computer Interaction and Data Base
Research Group, though, given that the name "GRIHO" was already known in their field, we decided to keep it.

In 2005 the Government of Catalonia officially launched an action to catalog and organize according to their worth all the research groups of the Catalan spectrum. Coinciding in time, new members join the group expanded to more areas of interest group. Thus, the group proposes a new name update:
the term "DataBase" is changed to "Data Integration", it better reflects the spirit of the new additions.
Being, therefore, the current name of the Human-Computer Interaction and Data Integration

The logo represents the group identity, in an abstract way, a computer (left), a person (right), and interface between both, which serves as a communication link between two entities, adapting to the shape of the surface of the computer screen in one side and to the peson's face in the other ... function that represents the mission of our research.
In terms of design, the current members of the group have always known the current logo and identity have no information about whether it existed before any other.
Yet we continue to maintain it for reasons that we feel identified and a logo that is currently in our area is well known.